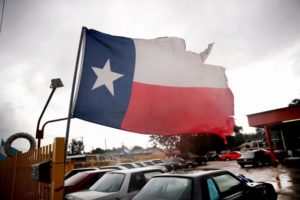 The initial response from the public has been remarkable, of course. Financial donations are pouring in from all over the world. Neighbors – and strangers – have stepped up to physically rescue thousands from their flooding homes. Tangible items like diapers, clothes, hygiene products, and nonperishable food are being collected at businesses and homes all over the country to be donated to the shelters.

Let’s do some math. There are approximately 1,600,000 homes in Harris County. As of Tuesday, August 29th, 30% were flooded. This number could very easily keep climbing if levies break or more water from dams gets released. But let’s assume 30% is the number. As of 12 months ago, of the 1,600,000 homes in Harris County, only 15% had flood insurance according to the Insurance Information Institute. Applying that percentage against the percentage of homes flooded, there are approximately 408,000 homes flooded in Harris County with no coverage. According to Zillow, the median home price in Harris County is $269,500. If we assume those homes are completely destroyed, that’s over $100 billion in property damage.

Of course, all those homes are not completely destroyed. Many homes will be restored and livable after a lot of hard work. But, add in all the personal property damage (furniture, antiques, art, clothes, etc.) and damage to local businesses, it’s no surprise that the estimated total damage from Harvey is going to cost – you guessed it – $100 billion (according to Imperial Capital).

According to JP Morgan, the insurance industry will likely pay out up to $20 billion. The state of Texas has the largest “rainy day” fund in the country – estimated to be around $10 billion – but who knows how much of that will be spent. The federal government has pledged support – but again, who knows.

What we do know for sure is there is going to be an extremely large gap in available funding to help people affected by Harvey rebuild and recover. Folks will need our help for years to come. Please do what you can to keep sending donations to the right groups who are dedicated to rebuilding Houston and the coastal area. Attend Harvey benefit concerts. Use Amazon Smile and select Harvey as your cause. But, do not limit your efforts to the short term. When December rolls around and you’re looking to make some donations – Harvey. Birthday coming up? Ask for donations to Harvey in lieu of gifts you don’t need. For years and years to come, remember Harvey. The TV trucks, news crews, and social media campaigns will soon move on to the next story. But the immense needs in Texas will persist.